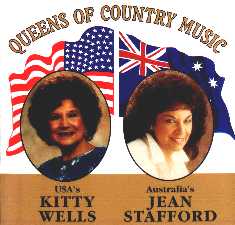 Together - the Queens of Australian and American country music.

Jean Stafford and Kitty Wells are the essence of country music. Kitty blazed her way to the top in the 1950's with a string of number one records. Starting with It Wasn't God Who Made Honky Tonk Angels she epitomised the strong and resolute woman that has inspired a few generations of performers to follow in her ground breaking shoes. No doubt a young Jeannie Stafford at home in Tasmania was among those who picked up a guitar and sang along with the woman anointed as 'The Queen Of Country Music'. That Jeannie went on to create her own legend in Australian country music circles and internationally through the 70's and 80's made this pairing all the more natural and almost inevitable. It took vision however to bring together the two Queens - from the moment you hear these unique artists on the special new recording of Kitty Wells biggest hit you'll know it had to be - maybe it was God who made these two honky tonk angels!

In 1952 'It Wasn 't God Who Made Honky Tonk Angels' ushered in a whole new era for country music. Country's first great female star was born and the woman's point of view found musical expression in the hitherto male dominated world of country music. Kitty Wells was born and raised in Nashville and met Johnny Wright, the man who was to share her life in country music there while working on 'The Old Country Store', a radio program broadcast over WSIX. Some years of radio and live performances in the Tennessee region elapsed before Kitty was signed to Decca Records and the 'right' song in the guise of 'It Wasn't God Who Made Honky Tonk Angels' came along. Once it did Kitty Wells was hardly ever off the charts. During one stretch of 161 weeks there was always a Kitty Wells record in the Top Ten! With many awards through the years including Billboard Magazine's number one female vocalist every year from 1954 to 1965, being inducted into the Country Music Hall Of Fame in 1976 and a Grammy - Lifetime Achievement Award in 1991, Kitty Wells is the undisputed 'Queen Of Country Music' still performing over 100 dates a year. In April 1998 Kitty, Johnny and their band came to Australia for the very first time to perform 'In Concert' along with Australia's 'Queen Of Country Music' Jean Stafford.

Growing up on a farm in Meander in central Tasmania, Jean rose to the top of her chosen field in Australia, winning her first three Golden Guitars as 'Best Female Vocal' in 1975 for What Kind Of Girl Do You Tbink I Am. In 1983 Jean appeared at the prestigious International Show at Fan Fair in Nashville leading to offers of US recording contracts. The 80's saw Jean acknowledged a true Superstar of Australian Country Music - she recorded three top selling albums for EMI, was immortalised in The Waxworks Of Stars in Tamworth, toured with international artists and finally in December 1989 was officially crowned 'Queen Of Country Music' in a ceremony organised by Sydney radio station 2NBC-FM. In 1990 the album Classic Jean Stafford eclipsed the sales of all her previous efforts, going gold within six months of release. Many awards and achievements have followed including being made a Honorary Citizen of the State of Tennessee, receiving and being nominated for Mo Awards and being appointed as Ambassador for Tourism of Tasmania to Australia and the USA. Jean has continued to record in Australia and the US and remains a major force in contemporary country music. Her albums That Say's It All and Finest Collection have also achieved gold status. A duet recording with Kitty Wells on It Wasn't God Who Made Honky Tonk Angels is the realisation of childhood dream when, at the age of nine, Jean was inspired to sing and play guitar along with 'The Queen Of Country Music'.