Each month guitar picker and Webmaster Bob Howe brings you the latest Country Music happenings on the Internet. You can surf your way from month to month, or why not bookmark the main index for the complete contents!
Join our mailing list below for notification of each new column.
Country Music Artists and Entertainers .... click here .... to find out how to get your OWN Web page!

As the World Wide Web expands at a cracking pace, the "tyranny of distance" gets smaller all the time, and technology brings us closer and more up-to-date with the news. No sooner had we finished our "Virtual Tour" of Pam Tillis' tour bus, there she was, beaming into our living room by satellite (courtesy of the Midday Show) and announcing her tour of Australia. This month we also note even more Australian acts appearing on Web sites overseas. Tiara Award-winning band STRUM are currently featured at Saradon Country, The Home Of U.K. Country Music On The Internet. Saradon hope to be linking up with the band for a LIVE broadcast, but for now, check out the review of their album. The boys from STRUM are also interviewed by Eddie Bear on the U.S. Radio Etc. site. Wayne Horsburgh is back in Australia from his latest round of American appearances. We first found Wayne in cyberspace at IFCO (the International Fan Club Organization) and now U.S. fans can get his recordings from Songtek or check out his Australian dates at the site of his agent Lynne James. Last but not least, all of these links and more, plus a chance to hear a sample of Wayne's music, can be found at ShowNet, the Directory of Australian Showbiz.

Another yodeller, and undoubtedly one of Wayne's influences, Frank Ifield recently appeared on John Laws cable TV show on Foxtel. John and Frank reminisced about the old days of Australian TV, when they once did a duet of "Tom Dooley"! Have a peek at Frank's Web site which has recently been updated, then visit The Country Music Store to order his album. While you are there, read Rosie's review of the Fisk and Cristian album. Donna and Michael recently performed their hit single "Rock 'N Footy" at the MCG for the AFL Grand Final opening show, with 100,000 spectators singing back-up! The Country Music Store has the album, and the single is available from The Seven Store.

Strum, Fisk & Cristian, Luke & the Drifters (see below), and Andrew Clermont (see last month) are just some of the Web-enabled performers on the outstanding "Open Road II - Unexplored Country" CD from ABC/EMI. Two discs that demonstrate the overwhelming amount of talent that resides in this fair land! Also available now is the new Jim Haynes laugh-fest "Ratbag" and from the Australian Poets' Series, Jim Haynes presents "Blue The Shearer" (Col Wilson). Col recites his poems with a little help from ARIA-winner Shanley Del and young Paddy Ryan. A search of the Internet reveals a few sites that contain Bush Poetry, but it would be great to see someone create a central source on the Web that could serve as an archive for this cultural tradition.

Stephenie Grant has released her second album, "Déjŕ Blue". An incredible achievement for Stephenie when you consider she is still at school. Stephenie's first album, "My Old Friend", won her the NCEIA Dolphin Award for Best New Recording Talent. She has since supported a virtual Who's Who of Australia's top country artists including J.W., Gina, Troy, Bucko, Shanley and a North Coast tour with the Delltones.
Sharing the bill on a show with the Bushwackers brought Stephenie's considerable talent to the attention of Roger Corbett who co-produced "Déjŕ Blue" with Pru Clearwater. Corbett and Clearwater also wrote material for Stephenie's album, which features top musicianship from the likes of Michael Fix, Michel Rose, Marcus Holden and Garry Steele. The album also features a terrific duet with ABC music star, Darren Coggan. Darren is a big fan and also penned a song especially for Stephenie.
Stephenie's website has undergone a make-over to coincide with the release of the new album and will shortly contain samples of each track. She has also launched, by popular demand, the official Stephenie Grant Fan Club and the site contains details of a great introductory offer for fans which includes 12 months membership, the new CD, the "Déjŕ Blue" full colour poster, a quarterly newsletter, and the promise of more goodies in the future. A special mention for webmaster Steve Wainwright, a tireless worker who promotes young Australian talent like Stephenie.

Making his second visit to Australia this year, Dale Watson once again inspired local audiences with his "Real Country" sound. I caught up with Dale at The Basement in Sydney (picture right). As a treat for visitors to the Cowboys In Cybersp@ce Web site this month, you can hear Dale talk about his Australian-made Tomkins guitar and his new album, and see more pictures from the show. 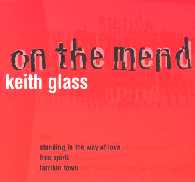 Dale was supported by Keith Glass, fresh from an award-winning spree at the Mildura Festival. Keith picked up the Australian Independent Country Music Awards for Best Single ("Smoke and Mirrors") and Heritage ("Larrikin Town"). Congratulations Keith! The recording of "Larrikin Town" features The Amazing Rhythm Aces and the Crosby Sisters, and is one of the tracks on Keith's new 4-track CD entitled "On The Mend" which also includes duets with Lyndsay Hammond ("Standing In The Way Of Love") and truckin' star Nev Nicholls ("Free Spirit"). Order your copy on-line now!

If you want to share the location of an interesting site you’ve seen or request a topic for discussion in future columns, why not E-mail me. Don't forget to listen out for Cowboys in Cybersp@ce each month on the radio waves with Belinda Miller of Murri Country , 4AAA –FM (98.9 in Brisbane). Until next month, happy surfing.

Would YOU would like to be added to our FREE mailing list and be automatically notified each time a new Cowboys in Cybersp@ce article appears on the web?
Just enter your E-mail address (and/or comments) here and click the button once!
(If your browser doesn't support "forms", E-mail us above)

Back to top of this page
You can use this box to search this site for your favourite Country Music artist...
...or if you want to search the World Wide Web...
...type their name into this search engine box and then press the GOOGLE SEARCH button.

Visit the rest of our site while you are here...